Below can be found a series of videos of Lewis-Merthyr Band, including our National Eisteddfod of Wales performance at the Wales Millennium Centre, our S4C broadcast with Sir Bryn Terfel and the central feature on the band from the BBC programme "The Taff - The River That Made Wales" with Will Millard.

Also to be found below is footage of the band performing at the Principality Stadium for the Rugby World Cup, national anthem performances from the 2020 Six Nations tournament, plus items from performances at the Welsh Proms in the national concert hall of Wales, St David's Hall, Cardiff; at Llangollen Pavilion; and more.

Additional, up to the minute videos of the band in performance are also available on our YouTube channel here

If you have, or are aware of, any footage of the Lewis-Merthyr Band not included below, please contact us here

Every year, since 1919, Lewis Merthyr Band has supported and performed for Remembrance Sunday

Despite services & parades regrettably having to be cancelled across the country in 2020, due to the global covid-19 pandemic, this year will be no different for the band

Below can be found "We Will Remember Them", our 2020 Remembrance Day virtual tribute to The Fallen, dedicated to the memory of the Porth Heroes of the Great War, 1914 to 1919

"They shall not grow old
As we that are left grow old
Age shall not weary them
Nor the years condemn
At the going down of the sun
And in the morning
We Will Remember Them"
The above recording of Abide With Me, and the full "Brass & Voices of Wales" album, is available to listen to FREE and also for paid download at www.lewismerthyrband.bandcamp.com CD recordings are also available at www.lewismerthyrband.com/cd

On 21st October 1966, disaster struck the Welsh mining village of Aberfan. At 9:13am, 150 000 tons of coal waste descended on the community from mountain top tips. The resltant avalanche buried Pantglas Junior School and several neighbouring homes. 28 adults and 116 children were killed... To mark the 50th anniverary of the tragedy, Christopher Wood wrote this work, "Aberfan". It was premiered by the Royal Philharmonic Orchestra at the 2016 Welsh Proms, held at the national concert hall of Wales, St David's Hall, Cardiff. The performance was conducted by Welsh Proms Artistic Director, Owain Arwel Hughes CBE and was also broadcast on the UK's leading independent radio station, Classic FM.

A year later the work was transcribed for brass, and the premiere performance of that version was given at the 2018 Welsh Proms by the massed bands of Lewis Merthyr and RAF St Athan, again at St Davids Hall, Cardiff. The work was also recorded by Lewis Merthyr Band for the Welsh Proms album "Brass & Voices of Wales", and it is that recording which is included here. Both the premiere performance and recording were conducted by Owain Arwel Hughes CBE. The album is available for download at www.lewismerthyrband.bandcamp.com while copies of the CD are available from www.lewismerthyrband.com/cd

​The people of Wales will never forget the tragedy of Aberfan, a disaster which shook the country and which cost a Welsh community a generation. Requiescat In Pace - Cofiwch Aberfan

In Spring / Summer 2020, Lewis Merthyr musicians were due to travel to three continents to perform in a series of high profile international events marking the 75th anniversary of the end of the Second World War and 75 years of peace in Europe. Due to the Covid-19 crisis however, these events were all understandably postponed.

As with other musical and wider community groups, the band were unable to meet to rehearse and perform together, but we simply couldn't let the 75th anniversary of VE Day pass however, without recording a tribute, albeit remotely and individually from 30 separate locations across South Wales and wider.

Here is our VE Day 75 tribute. Stay safe, stay healthy and - for now - stay home everybody

Excerpts from the 2019 performance are available on the band's YouTube channel, including the below premiere performances of Craig Roberts' settings of Arwel Hughes' "Arwelfa" and Sanctus, and a setting by Mervyn Burtch of Handel Parker's "Deep Harmony", adapted for brass band & organ by Craig Roberts & Keith Griffin from the composer's original manuscript arrangement for brass band and male choir. The work was performed in celebration of the composer's 90th birthday, in the presence of Rita Burtch

On June 18th 2018, at the invitation of Member of the Welsh Parliament Rhianon Passmore MS, a symphonic brass  ensemble from Lewis Merthyr Band appeared at the Royal Welsh College of Music & Drama alongside such prominent artists as Sir Karl Jenkins, Nicola Benedetti CBE, Sheku Kanneh-Mason, former Royal harpist Claire Jones and Owain Arwel Hughes CBE to launch the findings of the Professor Paul Carr's 'Land of Song' report into access to music education in Wales. The below video from the launch was produced by Super 8 Productions

​BBC television feature - The Taff, The River That Made Wales

The band were recently featured on BBC television in "The Taff". The programme has been incredibly popular and successful, and has been repeatedly screened on BBC Two, BBC Four and BBC Wales. The central feature on Lewis-Merthyr Band and Trustee Ivor England from Episode Two of the series can be found below

The band has featured at the national stadium on numerous occasions, performing for the Wales v Italy Rugby World Cup International, Judgement Day and corporate occasions, in front of tens of thousands of attendees and worldwide television audience. Amateur video footage taken from the crowd of the band's performances of the national anthem can be found below

The performance was captured on tape, and, what we believe to be the only known recording of the work, is featured in the below video, laid over images of Gloucester Cathedral. The work now forms a central element of a new project the band plans to explore in 2021/22.

Performances of additional works from the 1983 Gloucester Cathedral concert, plus additional vintage videos of the band in performance from the 1980s back even to 1932, can be found in the Vintage Video section of the website here

The below is taken from an archive recording from a BBC Listen to the Band programme, recorded on February 4th 1981 at the BBC Studios, Llandaff 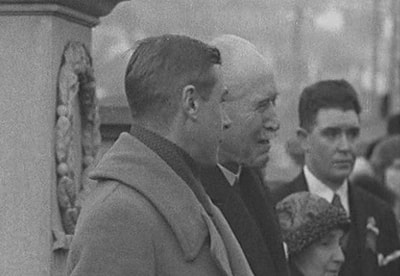 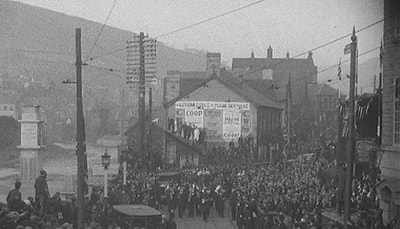