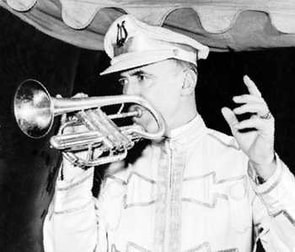 Twenty years ago, in the millennium year 2000, Lewis Merthyr Musical Director Craig Roberts worked together with composer & sound director Tim A. Duncan and the Wild Rose Theatre Company on the touring theatre project "Barnum On Ice".

Barnum On Ice was more than a standard retelling of the Barnum story.  The music, recorded by students of the Royal Northern College of Music and University of Salford under the direction of Tim & Craig, had been extensively researched and was crafted as a tribute to the great American circus band director, Merle Evans.

Tim was the perfect composer for the Barnum project. A bass guitarist, Tim was originally a french horn and tenor horn player, who had grown in his formative years as a member of the Middleton and later Besses of the Barn Band, at that time one of the truly great British brass bands.

Tim's years at Besses were the innovative period under the great French Horn player Ifor James. This was a period when the band experimented with replacing tenor horns with prototype hybrid french horns, and also were a pioneering ensemble in terms of new music.

Through the 1970s and 80s, Besses worked with and commissioned "Images" (John McCabe), "Of Knights and Castles (Raymond Premru), "Australian Fantasy" (Gordon Langford), and Concertos for Tuba from both Joseph Horovitz and Edward Gregson, both of which were premiered with the renowned tuba soloist John Fletcher. The latter of which was also the subject of a BBC "Omnibus" documentary, presented by the orchestral maestro Andre Previn. Besses also gave the first performance of Tim Souster's "Echoes", the first work for brass band and electronics. 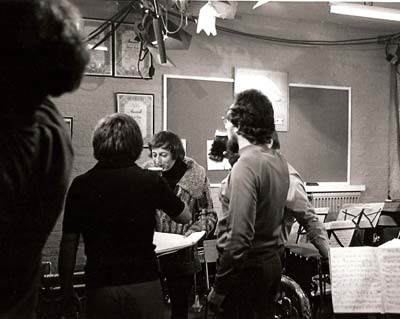 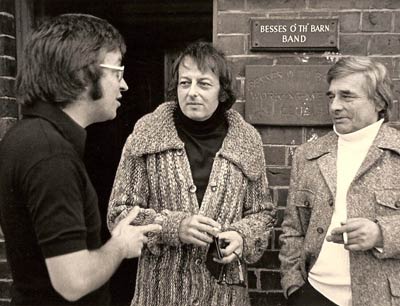 Twenty years have passed since the Barnum Project and, with the renewed popularity of the subject material, thanks in no small part to the movie "The Greatest Showman", it is felt that a work based upon the original orchestral music from the project would be very popular with concert audiences, in the format of a "concept piece" concert suite for brass band.
​
The first "concept piece" concert suite for band was Dr. Peter Graham's "Cry of the Celts". Written in 1997 and premiered at the '97 European Brass Band Championships at the Barbican Centre, London, the 20 minute suite based on music from Ronan Hardiman's "Lord of the Dance" proved incredibly popular with audiences and brass musicians alike. It spawned a number of very successful concept works of original music, including Graham's "Windows of the World" and "Call of the Cossacks" plus Philip Sparke's "Hymn of the Highlands" and "Day of the Dragon", Rodney Newton's "Echoes of the East" and more. Examples of these can be found below
Realising Barnum as a concert suite for live performance has often been considered by Tim, but it seems particularly apt at the present time. The music for Barnum On Ice was designed for choreography and, as a result, to be performed and recorded to click track.

At the present time, when group performance of music is prohibited, many groups - including Lewis Merthyr Band - have recorded socially distanced "virtual choir" style videos in isolation. Examples of the band's own videos, recorded for Rhondda Cynon Taf Council to mark VE Day and Victory Day 75, can be found below

The vast majority of music recorded remotely by groups internationally has been light, familiar popular music, designed to entertain and boost morale in the current crisis. While this of course has merit, little music of substance is being produced and performed at this time, and particularly in the brass band sphere. It is proposed therefore to use this period for Tim to work with the band to realise the Barnum concert suite.

​The proposal is to produce a c.20 minute suite of music, which will mark key episodes in Barnum's life - the building of the Barnum museum; the catastrophic fire which destroyed it, and more. While the subject itself could be perceived to be stereotypically standard brass band fayre, the music is anything but. The feel of the music is modern, vibrant and atypical of anything else currently written for the genre, yet highly approachable and would be popular with brass band and wider audiences and performers. This further strengthens the need for the music to be realised.

It is planned that the music will be created and developed remotely, in consultation between the composer and musical director, and musicians where required, via Zoom. When complete, the various movements will then be played and recorded by the musicians in isolation, and a composite video of each movement be produced and placed on YouTube for free public consumption. Following the period of writing and workshopping between September and December 2020, this complete recording will be achieved before the end of April 2021.

After the current crisis is over, the band will then work on the piece further and give live performances of the work at a number of their 2021 engagements, including currently scheduled international touring performances in Autumn 2021.

It is further envisaged that four movements from the work will be earmarked for performance as a work for brass band contest performance, which remains the main outlet for the performance of major works for the medium, and the band will promote this work as such for selection to the National Championships of Great Britain.

Brass bands as a genre are somewhat starved of new compositional voices from outside the movement itself at present, and this project brings both a new voice to the medium, and a voice with experience in the genre and understanding of its somewhat unique scoring, and experience of introducing progressive new music to bands.

Tim A. Duncan is an English music composer /producer from Manchester. Tim worked originally as a sound engineer with artists such as Ruby Turner (Guilty 1996), Joe Longthorne (Song Book 1988, Reflections 2001), One Way System (Waiting for Zero 1998) and Chris Farlowe (Glory Bound 2001). His career quickly developed into production work and then studio ownership. As a composer he has achieved critical acclaim in compositional work in theatrical ice dance, writing with compositional partner Edward Barnwell.

As a bass guitarist he has also played with "Mirrors over Kiev", "Dangerous Games", "Mitosis" (members of which went on to form The Chameleons and The Wedding Present"), as well as "Heartland", "Matrix" and "Mirrortown". Tim produced George Borowski's album "The Bait" in 1989, recording and mixing in a derelict pub in Macclesfield. In 1998 he began recording "Credo" with producer Roberto Danova, recording choirs in Armenia, Georgia, Italy, Israel, Russia and England, the final album of which was then released in the millennium year. The album to this day remains the only disc of its type to contain performances from all the main Christian Churches together on one recording.

Further information on Tim's work with the Imperial Ice Stars can be found at www.imperial-ice.com