Throughout 2020 and beyond, Lewis Merthyr Band, together with our partners, will explore an extended heritage project, aimed at providing a lasting, in-depth and publicly available history of Rhondda's oldest instrumental ensemble, plus a central focal point and tourist attraction centred around the rich musical heritage of Rhondda.

Lewis Merthyr Band has a long and illustrious history. Previously thought to be founded in or around 1880, recent research has revealed that a band has actually been in existence in Porth for over 150 years, and - dating back to 1855 or before - makes Lewis Merthyr Band the oldest instrumental ensemble in Rhondda Cynon Taf.

Throughout its history, the band has also performed at a wealth of significant events, both within and beyond the local area. In 1912, the Cymmer Military Band performed for Royalty, parading through the streets for the visit of His Majesty King George V and Queen Mary to Rhondda, and in 1932 the band also performed for HRH Edward, Prince of Wales, later King Edward VIII.

The band are photographed at the mountain top unveiling of a memorial to the fallen of the First World War and has performed alongside numerous stars of stage and screen, including Sir Geraint Evans, the actor Glyn Houston, and more recently the orchestral conductor Dr. Owain Arwel Hughes CBE & Sir Bryn Terfel, with whom the band were recently filmed at the Rhondda Heritage Park for a nationwide television broadcast.
Lewis Merthyr Band continues to serve the community of Rhondda Cynon Taf to this day and will forever be proudly linked with the collieries, mineworkers and communities who founded us.

An outline of the band's proposed heritage project can be found below, while further detailed information regarding the activities of the current Lewis-Merthyr Band can be found in the About and News sections of the website

Below is an outline of a five stage heritage project the band proposes to undertake throughout 2020 and beyond, and includes details of the proposed relocation of the band to the former Lewis Merthyr Colliery - now "The Welsh Mining Experience, Rhondda Heritage Park" - plus the creation of an accompanying exhibition; resident and mobile interactive installations; a book on the history of the band; and accompanying online visual & oral history archives
​Why Labour & Love?
​
Labour & Love is the title of the first original musical work composed for brass band, written by Percy Fletcher in 1913. It's a title which perfectly captures the spirit of brass band music making, and the incredible hard work and dedication of the thousands of brass band musicians across the nation, and the globe, commit to their passion - hundreds of which from the local area have committed across 150 years to make the Lewis Merthyr Band the great musical institution it remains to this day.
Overview
1. ​Book

​Active research is currently being undertaken by the band's own archivists, as well as staff & researchers at Insole Court (mansion of the Cymmer Colliery owners) and of the Rhondda Heritage Park.

It is proposed that a book about the history of the band, in a similar vein to those produced by other significant musical groups, be commissioned from a local author, based upon the completed research, and that this book then be made available for general sale in support of this project and of the Rhondda Heritage Park.

It is suggested that the book be structured around the following significant periods in the band, and Rhondda's, history, namely:

It is further proposed that contributions for the above, and an accompanying online oral history project (see below), be sought from leading figures who have been associated with Lewis-Merthyr Band, as detailed below
2. Oral History Project​
​
In tandem with the written history outlined above, it is proposed that a digital oral history archive be created, featuring interviews of former members, conductors and well known personalities associated with the band, a list of which can be found below. A similar archive recently compiled by the Black Dyke Band can be found here

*N.B. Given the advanced age of some of the individuals involved, it is essential that this project be undertaken soonest if it is to be realised and successfully captured
​
3. Rehearsal & Exhibition Space: The Music Room at Rhondda Heritage Park

​At present, no single archive exists of the history of Lewis Merthyr Band, or indeed of music in Rhondda Cynon Taf. There is also no tourist attraction dedicated to music in Rhondda, which has been the home base of so many iconic musical organisations for over 150 years, and is the birthplace of both John Hughes' iconic Cwm Rhondda (composed in Trehopcyn in 1905) and the national anthem, Mae Hen Wlad Fy Nhadau (composed by Evan James & James James in Pontypridd in 1856).

As part of the Heritage project, it is the desire of the Lewis Merthyr Band to see a "Music Room" aspect established at the former Lewis-Merthyr Colliery, "The Welsh Mining Experience - Rhondda Heritage Park" and added to the tourist attraction there. The band proposes that it shift it's rehearsal base, from the current space, the former Cymmer Colliery offices, and take up residence at the site, the rehearsal space then forming a "living" centrepiece exhibit of this new focal point for music in Rhondda Cynon Taf.

It is proposed that the former "Energy Zone" buildings at Rhondda Heritage Park be adapted to become the "The Music Room" exhibition and rehearsal space, and that the space also feature the adapted "bandstand" exhibition from the 2007 "Life Divine" Parc & Dare Band heritage project (which has remained in storage for over a decade in the basement of the Park & Dare Theatre), as well as newly created panels dedicated to the various iconic musical groups based in Rhondda Cynon Taf (Cory Band, Treorchy Male Choir, Pendyrus Male Choir, etc). It is aspired that the revised and newly created panels will also contain interactive audio and visual facilities featuring recordings and video of each group, which could be added to and revised over the course of time.

It is envisaged that "The Music Room" would become a central tourist attraction for visitors to the region, with an interest in music and the arts, and that the centre be utilised to signpost visitors to additional related sites already in existence in Rhondda Cynon Taf, including:

It is anticipated that the above "cultural tour route" would encourage considerable increased and transferable footfall with these venues, and that this route be promoted in both hard copy and electronically online as part of, and a lasting legacy of, this project

Further information on this aspect of the project can be found here
4. Additional Installations
​
In addition to the main rehearsal / exhibition space outlined above, it is aspired that an additional, smaller interactive display also be installed at Insole Court, Llandaff (mansion home of Cymmer Colliery owner James Henry Insole), plus a second mobile exhibition be created, to be utilised as a visiting display in locations such as the National Museum of Wales, St Fagans; Big Pit; Cyfartha Castle and more.

The band has re-established links at Insole Court will continue to enhance these through the presentation of live performances at the venue, and to partner with both Insole Court and Rhondda Heritage Park to enhance the annual Cymmer Disaster Memorial Walk, undertaken by local schools from both Llandaff and RCT on or around 15th July. An article on the walk can be found here

The band has considerable archive audio and video footage which can be utilised within these installations, and will also - as part of the project - record additional materials for use in these exhibits, as outlined below.
5. Merchandise 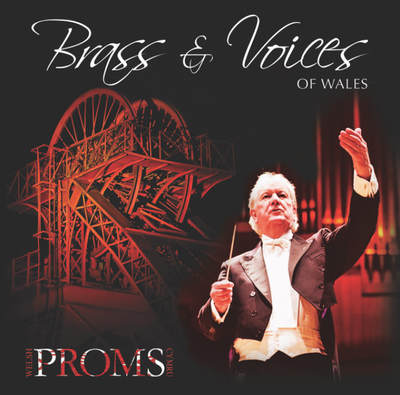 In order to give a level of financial support, and to assist in signposting to the project and heritage centre, it is proposed that accompanying audio and video products be produced, to accompany the book and exhibition.

Items from these products can also be incorporated features of the permanent exhibitions at Rhondda Heritage Park, Insole Court and mobile installations.

Proposed readily available content is outlined below, while additional content can be added in future years, thereby regularly refreshing and renewing the exhibits.

The band has already undertaken the first step in this process, recently recording a "Brass & Voices of Wales" CD at the new Y Pant School, Rhondda Cynon Taf together with the massed male choirs of Bridgend & Pendyrus, Dr. Owain Arwel Hughes CBE and the Welsh Proms. Further information on the recording, the cover of which bears a stylised image of the Rhondda Heritage Park, can be found here

Lists and samples of existing audio, video and both current and historical photographs of the band can be found in the Gallery section of this website, while numerous supporting documents are available in physical archive with the band, Insole Court and Rhondda Cynon Taf Council.
Summary

Lewis Merthyr Band, and the numerous other bands, choirs and additional musical organisations, have been at the heart of the cultural life of Rhondda throughout the region's history. It is right that a permanent centre dedicated to the history of music in the Rhondda - and signposting to current musical activities in the region - exists. In addition to the industrial heritage, and scenic aspects of the county, it's musical pedigree could indeed be a considerable attraction to tourism. As an existing tourist attraction, The Rhondda Heritage Park, would be a perfect location for the centre, and indeed has the existing, disused space which could be re-appropriated, and enhanced through this project. The band look forward to exploring this project over the coming months, and working together with our partners to ensure it is realised, and look forward to returning to its spiritual home of the Lewis Merthyr Colliery soonest 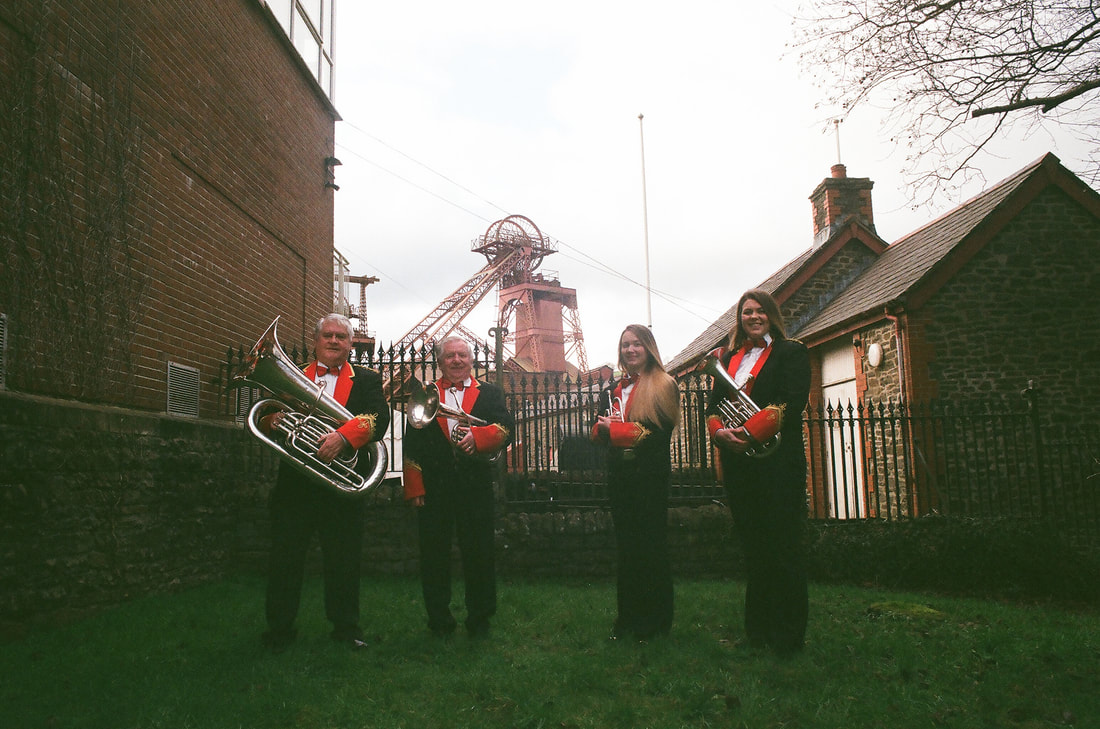